First of all I love Flash Builder and still stick with it for many year, bad news is upcoming Flash Builder 4.7 is somewhat…weirdo…(see below for detail) the best I can do is yelling out loud in prerelease group (and can be in public now because it's already release) until Adobe (or me) is giving up on this mess ;p

I will collect what I found about Flash Builder 4.7 bugs that Adobe will call it features and mess my life up here, feel free to enjoy ;)


issue #1 : Fancy overlay need (Should be fixed at release version)

just 1 click! and see below for what happen in new version… 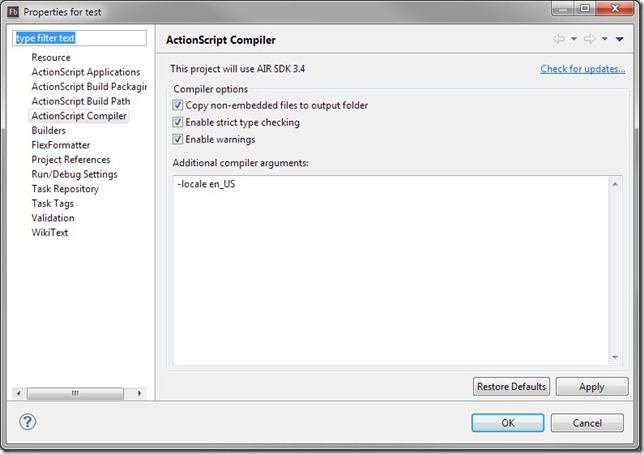 WAIT! WHY! I think Adobe never have old client that need to change something in an old project that required SDK 3.6 or else to publish as Flash 10 or lower (let me remind you new SDK need higher FlashPlayer version e.g. “The currently selected Flex SDK requires minimum Adobe Flash Player version 11.4.0.”)

What you gonna face if you try switch to newest SDK?

all this nightmare usually need 1 click to switch SDK to get job done…, guess what AIR 3.5 is on labs and what you gonna do to switch between (buggy) AIR 3.5 and (production) AIR 3.4?

issue #3 : The definition mx.core.ByteArrayAsset could not be found

issue #4 : The definition mx.core.FontAsset depended on by com.bit101.components.Component_Ronda in the SWC minimal_comps_0_9_9.swc could not be found

issue #5 : TypeError: Error #2079: Classes derived from Bitmap can only be associated with defineBits characters (bitmaps)

yeap, this is SHIT!

Thank you. I found error Error #2079 stick to long time

Workaround: switch to FDT or FlashDevelop!

I think that many of the described issues are caused by implementation of ASC 2.0, the new-gen compiler (AKA Falcon).

In previous FB version, the FB actually had its own integrated source parsing, not shared at all with the compilation work done by MXMLC/COMPC on build. For this reason, language features needed to be known both by the SDK and from the IDE itself.

With the new compiler architecture, AFAIU the idea is that the IDE can delegate to the SDK many of the operations that, previously, was part of the IDE code: it let the SDK build the AST (abstract syntax tree) of your projects, and use this data to provide code assist and other IDE functions, and finally reause this info on build, instead of starting from scratch. IDE and SDK are much more thightly integrated.

Now the sad facts: first, ASC 2.0 shipped with FB 4.7 doesn't supports MXML (Gordon Smith from Adobe, designer of Falcon, and other guys are currently working in the Apache Flex project to add MXML support), this is probably the reason behind the SDK selection is still available for Flex projects (they still use the old MXMLC compiler).

This, however, leads to a question: in order to improve integration between SDK and IDE, are they actually "locking" the SDK to use? When a Falcon-based MXML compiler will ever ship, FB will need to also "lock" Flex projects to its embedded SDK to leverage it? It seems, to me, that Adobe took some shourtcuts while integrating ASC 2.0, I hope that a they will review this in some future FB version (but I have a bad feeling about this).

Having the same problem! It really sucks

If I save your time, please do save mine :)